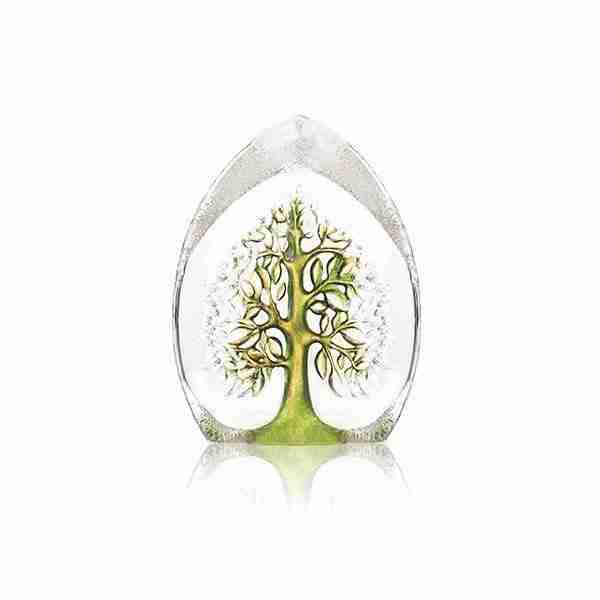 Yggdrasil in Norse cosmology, is an immense and central sacred tree. Around it exists all else, including the Nine Worlds. The tree of life is a symbol of growth and strength. Challenges are what make life interesting. Overcoming them is what makes life meaningful. Norse cosmology is the study of the cosmos (cosmology) as perceived by the ancient North Germanic peoples. The topic encompasses concepts from Norse mythology, such as notions of time and space, cosmogony, personifications, anthropogeny, and eschatology. Like other aspects of Norse mythology, these concepts are primarily recorded in the Poetic Edda, a collection of poems compiled in the 13th century, and the Prose Edda, authored by Icelander Snorri Sturluson in the 13th century, who drew from earlier traditional sources. Together these sources depict an image of Nine Worlds around a cosmic tree, Yggdrasil.

Cast crystal sculpture with painted and sandblasted motif.
This sculpture of Small Green Magical Tree of Life is handmade in Sweden and signed on the bottom.
Design Mats Jonasson

5.0
Based on 2 reviews
Powered by Customer Reviews plugin