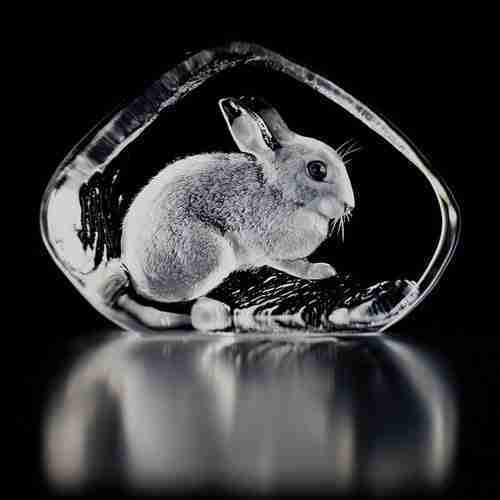 The brown hare is Britain’s fastest land mammal, clocking speeds of up to 40mph. There are about 700,000 hares in the UK. They are especially prolific in East Anglia, but sparser in the West Country and much of Wales. In northern Scotland, the brown hare is replaced by the mountain hare, Lepus timidus. The true origin of Lepus europaeus is something of a mystery. There is evidence of its presence from the Iron Age on wards, but not much before that. The expression to ‘kiss the hare’s foot’, meaning ‘to be late’, alludes to the hare’s great speed and the notion that, if you hesitate, it will have gone and all that will be left is a footprint. An image of three running hares with linked ears can be found in many medieval churches and cathedrals across Britain. Possibly due to their association with the Virgin Mary and the belief that hares were hermaphrodites or as a representation of the Holy Trinity.

Cast crystal sculpture with engraved and sandblasted motif.
This sculpture of Hare Resting Original Small is handmade in Sweden and signed on the bottom.
Design Mats Jonasson
Colour: Clear