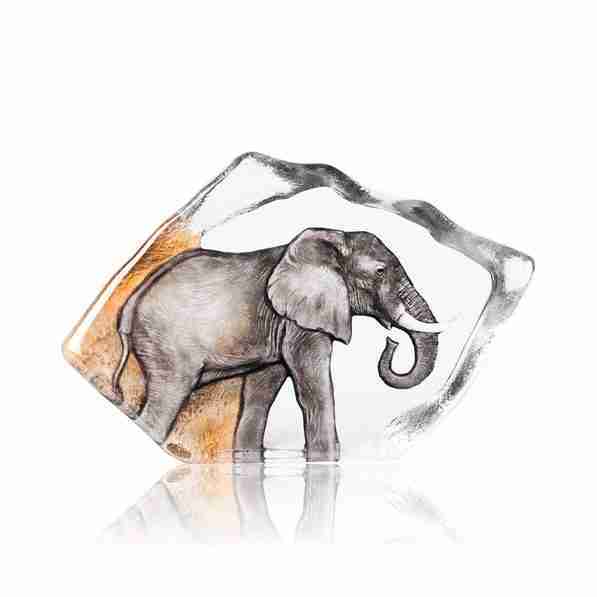 African elephants are the largest land animals on Earth. They are slightly larger than their Asian cousins and can be identified by their larger ears that look somewhat like the continent of Africa. (Asian elephants have smaller, rounded ears). Although they were long grouped together as one species, scientists have determined that there are actually two species of African elephants—and that both are at risk of extinction. Savanna elephants are larger animals that roam the plains of sub-Saharan Africa, while forest elephants are smaller animals that live in the forests of Central and West Africa. The International Union for the Conservation of Nature lists savanna elephants as endangered and forest elephants as critically endangered. African elephants are keystone species, meaning they play a critical role in their ecosystem. Also known as “ecosystem engineers,” elephants shape their habitat in many ways. During the dry season, they use their tusks to dig up dry riverbeds and create watering holes many animals can drink from. Their dung is full of seeds, helping plants spread across the environment—and it makes pretty good habitat for dung beetles too. In the forest, their feasting on trees and shrubs creates pathways for smaller animals to move through, and in the savanna, they uproot trees and eat saplings, which helps keep the landscape open for zebras and other plains animals to thrive. Masterpiece from Mats Jonasson, inspired by the fauna of Africa. Africa is home to many of the world’s most famous fauna in human culture such as lions‚ leopard, rhinoceros, buffalo and of course the African elephants among many others.

You can buy a single piece or have the entire Serie, buying them one at a time but the choice is always yours.

Conscious of our environmental responsibilities, this sculpture has been hand-painted using organic colours.
To preserve the beautiful finish of the piece, do not use strong cleaning agents and keep it away from strong
direct sunlight.
The Elephant Big Five Serie sculpture is handmade in Sweden and signed.
Design Mats Jonasson